The rains, the floods and the destruction of crops to come will be the result of a chastisement from Heaven. 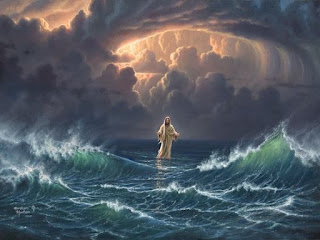 My dearly beloved daughter the rains which will fall all over the world represent the deluge of tears which fall from My Eyes as I watch God’s children wander so far off the path of eternal salvation.
The rains, the floods and the destruction of crops to come will be the result of a chastisement from Heaven.
The valleys of tears will spring up everywhere and it will be blamed on climate change and global warming. But this is not so.
So many people in the world do not believe in God. They do not honour me, His Beloved Son. Instead they are consumed with an obsessive passion for false gods.
What do I mean by this?
These people create heroes and idols in the world of TV, fashion, music and sport.
They then elevate them into human idols and they pay homage to them.
They then idolise them in ways which damage not only themselves but the person they have elevated.
They believe that these idols are sacred and do all they can to copy their lifestyles, their way of dressing, their personalities and even their physical appearance.
It amounts to paganism.
All of this has been foretold My daughter.
The world will idolise false gods.
These people are full of love for their bodies, themselves and with little charity or love shown for their neighbour in their hardened hearts.
Their hearts have turned to stone.
They do not love God. Instead they have fallen under the spell of Satan who has placed these beliefs and thoughts in their minds.
There is no respect for the human body.
The body is created by God and, as such, is a temple designed in which the presence of God should reside.
When Satan tempts humanity he focuses on the body and the pleasure it seeks through the senses.
This is why mankind now loves his own body to such an extent and he places it on a pedestal.
Never content with the way in which the body was made by God, he continually seeks to improve, change and amend the human body to suit his interpretation of perfection.
They way in which women, in particular, change their bodies and present it to the world in immoral ways disgusts Me.
Those women who have no shame in exposing their bodies commit sin yet they may not realise this. They think it is acceptable to abuse the body they were born with and flaunt themselves in way which can be the cause of sin.
Their love of self is one of the greatest sins of pride. They then convince young girls that it is acceptable to present their bodies in public in this way.
So many sins of the flesh are flaunted in the world and deemed to be acceptable.
Yet they are all punishable after death.  Not only is sin being committed but it is presented as being a good thing.
Adultery is acceptable today and applauded.
Murder no longer shocks and there is no longer respect for human life.
Sexual immorality is rampant and justified.
The days of such sinful behaviour are drawing to an end.
Until humanity accepts that sin will always be sin they forfeit the right to enter the Gates of Paradise.
For every sin you are guilty of, the part of the body used when committing the sin, will be burned and purified in Purgatory.
If in mortal sin you will feel the pain of the fire tearing through that part of your body used to commit the sin for eternity. There will be no end to this torment.
Why, why do they not listen to their hearts? So many people know that what they do is wrong but carry on sinning regardless because it is acceptable in the eyes of the world.
The entertainment and media industries have created a false acceptance of such behaviour that many innocent souls have been corrupted by lies.
Only the Truth can save them now. They are being given the Book of Truth but will they listen? Satan and his fallen angels will do everything to ensure that they don’t.
It will be only be when the chastisements are showered down from the heavens that they will have to discard their empty useless and disgusting habits. For they will be too busy trying to survive and put bread in their mouths.
Sadly it will only be through such chastisements that humanity can be purified on this earth.
By being given the gift of purification, while alive, they are being given a chance to avoid the lakes of fire.
Your beloved Saviour
Jesus Christ


Crusade Prayer (153) The Gift of Protection for children

“You must recite this Prayer once a week, before an image of me, your beloved Mother, and bless yourself with Holy Water before you recite it.”
O Mother of God, Mother of Salvation,
I ask that you consecrate the souls of these children (list them here…) and present them to your beloved Son.
Pray that Jesus will, through the Power of His Precious Blood, cover and protect these little souls with every kind of protection from evil.
I ask you, dear Mother, to protect my family in times of great difficulties and that your Son will look favourably upon my request to unite my family in one with Christ and grant us Eternal Salvation. Amen.

My dearly beloved daughter know that when you postpone prayer to Me, Your Divine Jesus, that you become weak and distanced from Me.
You must never postpone prayer or delay the time you need to devote to Me each day.
When you do, the evil one distracts you and fills your mind with worldly matters which are empty of substance.
Then you will feel an emptiness and a struggle will become apparent within your soul.
Don’t you know that you are nothing without Me? An empty vessel which nothing can satisfy no matter how powerful the allure of material wonders seem.
When I elevate a soul it entwines itself within My Sacred Heart.
But to stay firmly within Me the soul must communicate with Me and declare its love constantly and offer thanksgiving.  Otherwise it can become detached just as a baby is separated from its mother at birth when the umbilical cord is cut.
Do not take your eyes off Me for one minute for the evil one waits.
Then at the most unexpected moment he moves in for the kill and snatches you away.
He uses the senses to tempt and other souls to torment his victims. He especially targets My Soldiers and they suffer the most.
My daughter while busy with My work you took your eyes from Me and this caused you to suffer.  You became lost and confused. Your agitation increased as every interruption, caused by the evil one, meant you postponed your appointed time with Me, your Jesus.
When this happens you must go to Confession, receive My Body and spend time in prayer.
You must never forget to say My Beloved Mother’s Holy Rosary for it offers a ring of protection against Satan.
Go now. Come to Me today in prayer. Then during your day talk to Me as a friend and share all your concerns. Then hand them over to Me and leave all your worries to me.
Your Jesus
Posted by Billy Anthony at 23:32