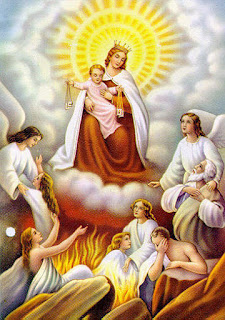 My dearly beloved daughter, the vision I permitted you to witness last night, was to strengthen your spirituality, and to show you the Truth of life after death.
During the first hours after death, Satan sends his demons to tempt souls – even at that stage.
He tempts them to reject the state of Purgatory. He does the same thing to those, who have died in a state of grace, who are destined for Heaven.
I showed you the speed by which souls plunge into Hell and the terrifying persecution they face, in order to warn those who do not believe it exists.
Billions of souls are there already, and there are so many entering every second, that it appeared to you like a shower of fallen stars, like a hailstorm, falling into the lake of fire.
I showed you also the shock and the joy of those souls faces, when they have been plucked, at the last minute, and saved. This is due to the suffering accepted by victim souls, for the salvation of such souls from Hell.
You saw, first, the terror, and then, the fear in their faces, as the Truth of their final resting place dawns on them. Then you were shown the joy on their faces when they realised that they had been spared.
The billions of souls, already in Hell, are those who rejected Me, shamelessly, during their life on earth. Many were smart, intelligent people, in positions of influence in the world, who went to great lengths to ensure that the Word of God was not heard. Many were responsible for ordering the murder of thousands of innocent people. They executed God’s children without one ounce of remorse in their hearts. They performed vile acts, involving sexual perversities, which are offensive to God and detested by Him.
Many, caused persecution against God’s Churches through secular activities, and in some cases, joined the enemy in black masses, where they worshipped the beast.
These are the souls you are saving, My daughter. Those with blackened souls and hearts of stone.
There are ten times more souls in Hell than in Purgatory. The billions of souls in Hell, all in different levels, outnumber those in Heaven by thirty-three for every single soul.
It is not easy to go to Heaven, and it takes much commitment to prepare your souls to enter the gates.
This is the time of the Truth. The Truth is not always pleasant, but it is necessary for all of God’s children to understand.
My Mercy is, however, great. When you ask for it, for yourselves, your prayers will be answered. When you ask for another soul to be saved, especially at the time of their death, your call will be heard. If you do not ask for My Mercy, it cannot be given.
At the time of The Warning, My Mercy will be poured all over the earth. Then you must ask Me for My Great Mercy, to protect you.
To those who reject My Mercy, this will be by their own free will.
My Mercy is plentiful, yet so few ask for it.
Your Jesus

O dear Jesus, protect us from the lies, which offend God.
Protect us from Satan and his army
Help us to love You more.
Sustain us in our battle.
Defend us in our faith.
Lead us to Your refuge of safety.
Help us stand up and defend Your Holy Will.
Strengthen our resolve to be Your true disciples.
Give us courage.
Give us confidence.
Guide us on the path of Truth.
Defend us against the enemy.
Pour Your Graces of Protection over us.
Help us to avoid temptation.
Bring us closer to Your Sacred Heart.
Help us to remain loyal to You at all times.
Amen.


My dearly beloved daughter, My Second Coming will be the final chapter in the fulfilment of My Covenant. This Covenant will see the birth of the New Jerusalem.
This New Jerusalem will signify the unification of all God’s children, who accept the Word of the Lord.
For the Jews, they will finally accept that the True Messiah has come to bring them the salvation they crave.
I, Jesus Christ, from the House of David, will come as Saviour, according to the Holy Will of the one True God.
They rejected Me, the Son of God, Who came in the flesh the first time. This time, I will come from the Heavens and will envelope My Chosen People with the gift of My New Kingdom.
They will finally be at peace, for the Truth, will be seen by them, and they will accept the Existence of the Triune God. There is only one God. There can be no more. Yet I Am in union with My Father. I Am God. I came in the flesh to show humanity My Mercy and to salvage them from final damnation. My Holy Spirit is also in union with the one God as It manifests within the souls of the prophets and inflames the souls of God’s children.
So many people will fight fiercely against My Second Coming, including those who believe in the one True God. They will not, as has happened in the past, accept the Word of God, as it is revealed through the prophets.
Many good and devout Christians will continue to reject My Word, right up to the end.
My Word will be challenged and torn apart, by the Catholic Church, in particular. But know this. The time for My Second Coming is close, and those who continue to reject Me, and the promise I made to My Father to Create His Kingdom on earth, will be left to one side.
After My Great Mercy is revealed, and when every opportunity has been given to all those who won’t accept the Truth, then My patience will be exhausted.
Your Jesus
Posted by Billy Anthony at 23:32