God the Father: When My Son is deemed to be a sinner, know that this is the greatest blasphemy 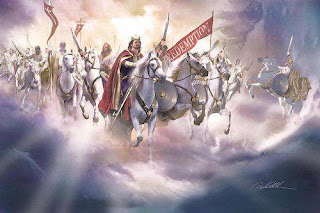 My dearest daughter, how would a parent react if they knew that their children faced death? Would they not fight to the bone to save them from all harm? This is precisely why I now intervene in the world by instructing My Son to tell the Truth, in order to save the lives of My children.
It is the little things in life, which have an impact on a global scale. A bee whose behaviour changes and where pollen cannot be created will have a direct effect on the life that exists on Earth. It is through the Church of My Son on Earth that life of the soul can be maintained. Without the Truth, My Son’s Church cannot sustain life. So, if lies permeate within the walls of the Church, without My interference, then this will impact on the life of the soul.
It will be when the Church turns against He Who created it, that life will be destroyed. This infestation will have a direct impact on the whole world, including those who do not believe in life hereafter. It will affect even those in other religions, which do not come from Me. When the lies infest the Mystical Body of My Son, Jesus Christ, on Earth, they will cause disease. Disease, if not tackled, will lead to death. Therefore, as God, the Father of all Creation, I will not stand back and allow My enemies to destroy the souls of My children.
When you are faced with lies, they will come tumbling out of the mouths of deceivers in a confused jumble of nonsense. The lies, which have already commenced, are couched in humble-like language, but disguise the greatest lies against the True doctrine of the Church. Know them for what they are – sent to cajole you into committing sin. When My Son is deemed to be a sinner, know that this is the greatest blasphemy, for this is impossible.
I sent My Son, as a man in the flesh and like all of you, with one exception. He was born without sin, and therefore, was incapable of it. Anyone who uses the Truth and then twists it, in order to introduce a new meaning into the Crucifixion of My beloved Son, is a liar. He does not come from Me and is an enemy of My Son.
Watch now, My little children, as the beast and the demons he has sent to take you away from Me, roam amongst you. You must be strong. You must always know that My Son gave you the Truth when He walked the Earth and when He died for your sins. He sacrificed His Body to redeem you, but He never became a sinner, for He is not one of you.
You must remain true to My Word and the Teachings of My Son. If you do not, then you will be tempted to accept lies, which will bring you nothing but eternal suffering.
Your beloved Father
God the Most High
Posted by Billy Anthony at 04:49