Virgin Mary: Many of my Son’s Church leaders say nothing. They no longer defend, publicly, the Holy Name of my Son. 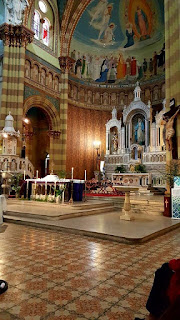 My child, the moves to insult the Name of my beloved Son, Jesus Christ, are increasing.
Not enough is it that they deny Him, many want to insult His image in the minds of those who believe in Him.
The Crucifixion of the Body of my Son, the Crucifixion of His Church, is escalating.
Many of my Son’s Church leaders say nothing. They no longer defend, publicly, the Holy Name of my Son. They lack the courage to defend the Body of my Son, His Church on earth.
Many do not want to draw unwanted attention because of the sins of priests in the past. Many, simply, do not have the strong faith required to be a true witness to the Truth of my Son’s teachings.
So many in the world do not believe in the Existence of my Son and this makes Him weep.
So many who do know the Truth, think it is acceptable to show disrespect by listening to blasphemy and still they remain silent.
You must, children, acknowledge the Truth of my Son’s Crucifixion openly and without fear. People will listen. You will be heard. If every servant of my Son were to remain silent, then who will speak of my Son?
Who will spread His Holy Word at this time when so many of God’s children deny the Existence of God?
Very soon they will have no excuse. When they see the state of their souls they will understand that they have a soul for the first time.
Pray that they become stronger after this and that they become true soldiers of Christ.
Your beloved Mother
Mother of Salvation

My beloved Mother of Salvation, please gain for all souls the Gift of Eternal Salvation through the Mercy of your Son, Jesus Christ.
Through your intercession, I plead that you will pray to release all souls from bondage to Satan.
Please ask your Son to show Mercy and forgiveness for those souls who reject Him, hurt Him with their indifference, and who adore false doctrine and false gods.
We beseech you, dear Mother, to beg for the graces to open the hearts of those souls who are most in need of your help. Amen.
For one week each month until the return of Jesus, commit to a 7-day novena:– Recite Crusade Prayer #130 3 times per day for 7 days.– The first Crusade Prayer #130 of your 7-day novena is to be recited on a Monday morning.– Each seven day novena includes one fast day. Day of your choice. Day of fast = one full meal; bread and water are permitted at other two meals; no snacks.